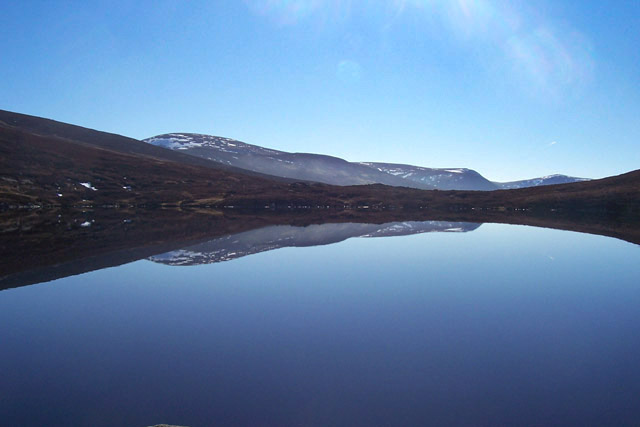 Early Spring At The Lochan

The storm died during the night and morning mist and frost now grips the glen.

It’s early April and after one of the longest and coldest winters for many years March brought a succession of gales and rain. Front followed front, crossing the country from the south west; not pleasant, but at least it was mild and rolled back most of the blanket of snow that had covered the hills for months.

A huge area of high pressure is now sitting right over Scotland.

As you climb steeply out of the gloomy glen the vista opens and on distant high moors curling blue smoke rises from newly kindled heather fires into the still air. Cock red grouse with brilliant red eye combs crow lustily from boulders and mounds; they fly off as you approach, speeding low across the heather, or hidden, they explode at your feet breaking the silence with an ear splitting alarm call frightening the life out you!

Spring has most definitely arrived in the Scottish Highlands and it’s good to be alive!

You have done this for as long as you can remember, not always fishing, often just walking or climbing, and you really don’t know how you would cope with the pressures of modern life if you could not escape them from time to time. You don’t do this every day, but you must do it some days. Distracting yourself from the effort of the stiff climb you ponder this; if your health were to fail, your fitness was lost, your legs were to buckle, your quality of life would be gravely diminished. These mental distractions seem to make the climb easier.

Now the lochan is high, not outrageously so, but high enough and far enough from any road to ensure it does not suffer from the attentions of many visitors. Not just anglers either, even walkers rarely pass this way. Truth is it’s not a really serious hike; a couple of hours just about covers it, but you amuse yourself with the thought that if you were the sort of person who considers nipping down to the shops for a packet of fags, going for a pint then buying a fish supper on the way home a Scottish triathlon, then you probably wouldn’t be enjoying this much.

More self amusing distractions from the task in hand.

The beginning of April is far too early of course, for the fishing anyway, but you knew that before you set off. The water will be far too cold and the fish inactive. You can see that the higher hills to the west still hold a lot of snow, the corries and gullies are packed with it. Melt water from that snow will keep the high lochans cold for many weeks to come.

Now mountain hares scatter before you. They are still largely in their white winter coats and very conspicuous against the dark heather. Looking up you just catch a glimpse of a very large dark bird with long broad wings as it vanishes behind a ridge. It may be an eagle, but it could be a buzzard. Sometimes it’s hard to tell if you don’t get a really good look. Once more you distract yourself painting mental pictures of fleeing hares and swooping eagles.

You are following the course of the steep stream that drains the lochan. It”s really pretty up here in summer where a fine spray from the many small waterfalls quench the thirst of flowering stream side alpine plants. These always provide a good excuse to stop for a rest and get a photo or two. Today there is not much to see, not even the early purple saxifrage is showing off its flowers yet.

You stop for a short rest anyway then press on.

You now have a choice of routes. To the left is a wide open heather slope; the angle is easy but the going is hard in the clawing heather. To the right is a steep craggy bluff that you have often scrambled up, picking your way along, up and over rocky terraces; it’s like a giant step ladder. Today however you continue to follow the stream which now enters a narrowing gully. It’s the most direct route. In summer the gully can be loose and wet, but today the wettest sections still hold deep snow drifts. The snow is very hard and you have to kick steps up the steepest sections. Safe enough if you take your time. You quickly gain height and before you know it the terrain opens up and you find yourself in a morass of peat hags with bleached skeletal roots of ancient Scots pines sticking up through the ground here and there. There are no trees at this altitude in Scotland now, but it’s obvious that a forest once stood here.

The peat hangs are hard going. Experience tells you to stay on the crests, too many times in the past you have sunk up to your knees in slimy wet peat when taking attractive looking short-cuts. Better to stick to the crests and work your way through the maze. On and on you go, eyes fixed on the task when suddenly you look up and the lochan lies before you.

The scene is startling.

The sun shines powerfully from a cloudless blue sky reflecting with dazzling brilliance from the calm surface while mist billows up out of adjoining valleys partly obscuring the steep hills on the far side of the water. Here and there around the lochan deep snow drifts run right down into the water itself.

A slight breeze picks up momentarily rippling the surface and shifting the mist from the lochan to reveal higher snow flecked hills beyond. It is breathtaking in its beauty. You are happy just to be here.

Finding a comfortable spot to sit in the short dry heather by the waterside you have a well deserved rest and take in the view. You scan the water for any rising fish but see none. You are not surprised by this. The truth is it’s far too early in the year to expect to catch fish on such a high loch, but that’s not the point, it’s enough just to be here.

Rummaging in your rucksack you find your Trangia mini stove. It’s a great bit of kit; lightweight, safe and easy to use. In a matter of minutes you have it set up, the meths burner lit and a small pot of loch water is heating up. This setting deserves more than a Thermos flask of stale tea or coffee, the brew has to be as fresh as the scene itself.

Refreshed your mind turns back to fishing. You set up your trusty 9 foot 5 weight fly rod, string it up with a floating line, a long leader and tie on a small black dry fly. You know you would probably have a better chance of success were you to fish subsurface, but with the flat calm you really don’t want to be casting randomly and causing disturbance. The truth is you really don’t enjoy fishing like that anyway and in any case with the fish most likely still in torpor you know you have little chance no matter what you do. You are going to scan the lochan for any rise, wander right round it and only cast if you see a fish move. You convince yourself that to fail elegantly is more satisfying.

You leave the rucksack and it takes you about half an hour to walk round the lochan. You do not make a single cast.

Back at the rucksack you start another brew. By now the sun has burnt off all of the mist and it feels warm. It’s great to be alive. Lying back in the heather with your rucksack as pillow you soak up the spring sunshine. You even dose off to sleep a few times, just for a few minutes, but it feels great.

Staring up at the sky from your heather bed a very large dark bird with broad wings comes into view. It’s an eagle, probably the same bird you saw earlier. You try to track it as it spirals higher and higher before being lost to sight. Oddly it’s the only bird you have noticed since arriving at the lochan. It has been strangely silent. The grouse and other hill birds it seems are still on the lower slopes.

Looking across to where the nearest snow drift runs down into the water you spot a single rise!

How big the fish is you cannot tell, but a fish is a fish. You approach as close as you dare. You tell yourself that in the flat calm it’s better to keep the cast as short as possible and the length of line on the water to a minimum. Carefully you extend the line and lightly land the small black dry fly at the spot where you believe the fish rose. Of course the rings of the rise have long dispersed, so you have no visible target and are working from marks on a mental picture. The fish does not put in another appearance and it’s the only fish you see all day.

Time for another brew!

It’s late afternoon now and as the sun drops lower in the sky, its warmth lessens. It’s a sign to go. You snip off the small black dry fly, wind in the line and put the rod back into its tube.

Setting off back down the hill you are sorry to be leaving, but at the same time happy you are not camping. There will be a hard frost tonight and at this time of year the nights are still long, the clocks were only set to summertime hours last weekend.

It was a great day and you ask yourself who needs fish anyway?

You are happy and satisfied and already planning your next trip to the lochan.