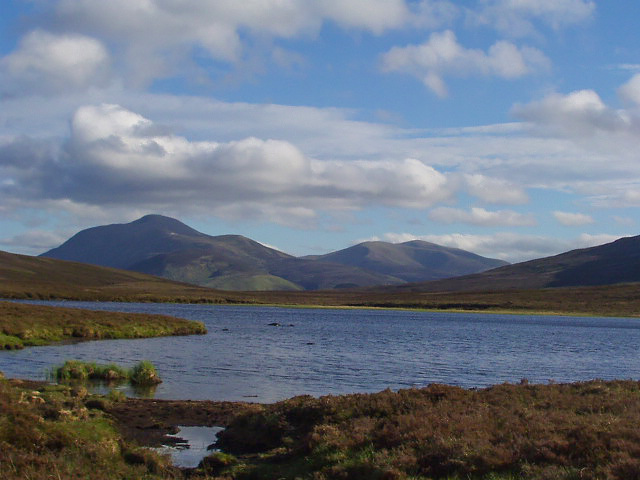 I remember reading an article by a well known Scottish angler that appeared to be more than a little dismissive, even mocking, of anglers who hike for miles over midge infested bog, or climb half way up a mountain to catch a few fish that might be more accurately weighed in ounces than in pounds. It may have been in a book actually – I can’t remember – it doesn’t really matter much, the point being made was that catching big fish is what matters and that stravaiging over moor and mountain is largely a waste of time unless some trophy fish lies at the end of it.

Well, fair enough, different strokes and all that but surely fishing must be about more than just catching big fish – or indeed catching fish at all? I guess we all like to catch a few big fish now and then, but if that’s the only thing that matters we might be better forgetting about wild fishing altogether and spending our time at the many put and takes where big fish are stocked on a regular basis. No long treks needed there, that’s for sure, and by the time you factor in transport costs, the lack of need for things like waders etc it’s probably a good deal less expensive than wild fishing – even free wild fishing.

It had been 30 years since I last stood by the banks of Lonely Loch in the shadow of the Misty Mountain. Back then as a fit, fresh faced young lad in my mid 20’s, I had gone up there with a few pals, one Sunday in November, just to take some air. I had never fished the loch and indeed had never thought much more about it.

It was early June and on the back of a good forecast my youngest son Martin (16 at the time) and I planned to bike along a rough track from the nearest public road as far as we could then walk the remaining long miles to the loch, about 9 or 10 miles in total. Equipped with our new “Argos Cat’s Paw” one man tents as recommended and tested to extremes by my friend Sandy Birrell, and intending an overnight camp, we set off on a Friday morning. Arriving at the road end, the weather was not holding true to forecast as we shouldered our 20 Kg rucksacks, mounted our bikes and headed off up hill into the teeth of a gale.

I could never be a serious cyclist for its own sake. If I as much as look at a bike the calmest day instantly turns into hurricane Katrina and no matter in which direction I head the wind is always in my face. That’s how its seems anyway. While on the subject of bikes: why is it that the default saddle configuration of all bikes is about as ergonomic as a reinforced concrete railway sleeper and twice as hard?

Anyway………none of this makes for pleasant biking believe me. We trundled along the rough path feeling every jolt of wheel on rock – total energy transfer from wheel to saddle to rear end that would baffle any physicist; I swear at one point I was actually going backwards. It was uphill most of the way. Glens tend to be like that.

It’s at times like these one is prone to depressing thoughts. Where has your youth gone? A thief must have sneaked up and stolen it while you were distracted by the task of raising a family and earning a living. OK, I’ll concede that sweating, wheezing and grunting up a glen on a bike is not a life-defining moment. Defining moments – that is realising you are no longer a young cool dude – are far more subtle: like hearing Pink Floyd being played mid afternoon on Radio 2, being stopped by a youngster on the street asking “ hey mannie, what time is it” or getting a return glance from an attractive young lady that clearly says “what are you looking at you old bastard”.

The only small comfort was my son, a fit 16 year old at the time, was also finding it hard going, so perhaps I am not so decrepit after all.

At the bottom of an adjoining glen we had to ford a major river as there was no bridge. Actually crossing a river with a bike is easier than without – you can use the bike for stability as you move from rock to rock. A walking pole with wheels. In this area it would be easy to get cut off between the burns in periods of heavy rain and indeed I recall a full scale mountain rescue here about 25 years ago when a walker went missing. He was found eventually safe and well. He had been cut off by rising rivers and had to stay put until the water dropped so he could get across. Never underestimate the ferocity of even the smallest mountain stream after prolonged rain.

We had many small burns to cross and I recalled that on my last visit all those years ago, these same burns were chock-a-block with salmon and what I guess were sea trout. It was like something out of a nature documentary, only thing missing was a fishing bear. You would approach the bank and salmon would zoom off at speed upstream, often with their backs out of the water it was so shallow. Some of these fish must have been 20lb + and there were lots of them. Changed days!

After passing a ruined shooting lodge (once a grand bothy, but vandalised many years ago) we eventually had to hide the bikes and continue on foot. It was great to get off that hard saddle believe me. The combination of a heavy pack, a hard seat and a rough track does little for the cheek bones. Blessed relief!

By now the weather was improving, the wind moderating and the sun making a show from time to time. It was warm. After a long foot slog, we eventually reached the loch and I had forgotten what a splendid spot it is. From our camp at the north end there were wide panoramic views with the magnificent Misty Mountain in the centre of the picture. Many Munros (hills above 3000 feet) can be seen from the west side of the loch, and today all were clear.

We set up camp, heated up some lunch, rested, set up the rods then headed for the water. West bank as the wind made fishing from the east bank impossible and the south end is a mass of reeds, not fishable from the bank. Martin was down before me and took a fish first cast on a red-tailed-black pennel. Not a monster, just about 6oz but what a lovely fish. It was the first of many we were to catch and I have to report that we did not land a single classic silver ‘Leven strain’ trout. In fact some of the fish were most strange indeed, very bright yellow, some all over and covered with bright spots. I had never seen trout quite like these before, whether or not they are unadulterated native stock or not I do not know.

We fished all afternoon and caught a lot of fish. Incidentally, the thought of adding the weight of waders to our packs was just too much so we left them at home and fished in walking boots from the bank. However we took shorts and sandals and did a bit of wet wading. The water was surprisingly bearable for a loch in early June sitting at 1700 feet. The sandals used I had bought in Italy about 25 years ago and I’ll bet the shopkeeper who sold them to me could not possibly have guessed where they would end up!

In the evening, after a good meal, we were back on the water. By now the wind had eased sufficiently to allow us to fish the east bank. This loch is not big and you can walk right round it in about 20 minutes. Martin fished dry fly for the first time and I am delighted to say that after missing many rises and a lot of swearing, he eventually caught his first fish on the dry! About 9.00 PM the loch went flat calm and a huge rise of trout started. In these conditions the fish can be hard to catch but we did land another few before turning in for the night. No midges either by the way, not a single one, I guessed though all that would change within the next few weeks.

We fell asleep to the sound of browsing deer, cackling grouse and the quiet whisper of the breeze on the heather.

Next morning the wind was quite gusty, and the hills shrouded. We fished until about midday by which time it was very warm once again. More fish fell to the wets and to the dries. We found that the better fish definitely came to the dries. By now though it was time to head home. I would say that we had it about right. We fished the morning, the afternoon and the evening over two days, just about right for this wee loch.

The bike-run back was wonderful – free wheeling most of the way. The advantage of biking and proof that, in spite of my suspicions and justifiable paranoia, glens do not alter their tilt on the inward journey.

So what did we catch? Well, loads. I did not count but we had dozens, all returned, all smallish, the best only about ½ lb, caught by Martin on a dry. The loch is a lovely spot and the total absence of litter, apart from one beer can in the water – left by some unthinking moron many years ago by the look of it – tells its own story. It was retrieved and disposed of, so hopefully there is now no litter there at all. Incidentally there was once a boat on this loch, as the mooring post, ring and the ½ buried wreckage of an antiquated fibre glass hull testifies in the eroded peat hags. I recall seeing this wreckage on my first visit all these years ago, so I would hazard a guess that it is unlikely there has been a boat in use here since the 1950s.

By now you will have guessed I am not going to reveal the location. Some hill walking Scottish readers will no doubt be able to figure it out for themselves. This is not elitism; I would just hate to think that the idiots who fish with ½ dozen rods each ledgering worms and who leave the banks strewn with their litter and filth might ruin a pristine spot like this after reading about it here.

A lot of sweat, a lot of effort for a few small fish? No doubt about it, but while trips to the likes of Loch Watten may produce superb days of quality wild fish, it is trips like this that stay with you and remain vivid in your memory until the moment you draw your final breath.

So why bother with all that effort and nature appreciation rubbish when there are all those excellent small man made fisheries stuffed gill to gill with big, ragged finned, ½ daft stocked fish right on our doorstep?

Well all I can say is that if you have to ask that then I’m afraid you really have missed the point; best stay where you are and I’ll take care of the wild places.