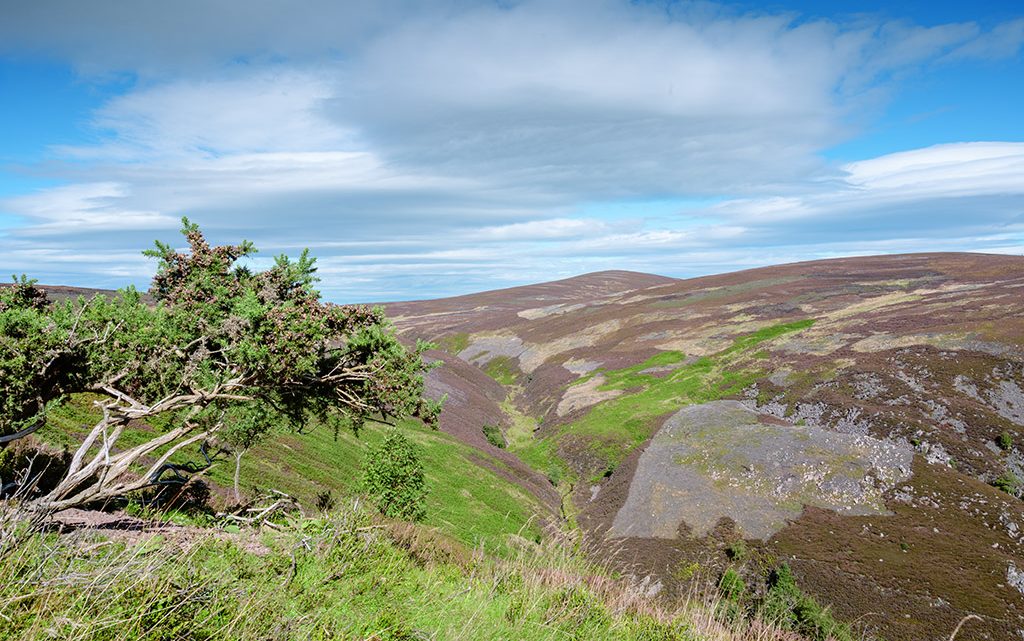 As a hill-goer of many decades, more than I care to remember if I’m being honest, one of the problems I occasionally encounter is a mental block when trying to think of new routes to tackle. This is compounded by advancing years and by that I mean my days of Munro bagging epics are behind me both in terms of physical ability and a general lack of enthusiasm for the crowds the modern day Munro Mania has brought to our more popular areas and summits. Tackling hills just because they are on a list and ignoring more peaceful, quite often more beautiful, places seems pretty daft to me now, but I have to admit that when I was younger and fitter I was just as daft.

Anyway we do try to get out to the hills every week if we can and this week I was struggling a bit to think of a genuinely new route for a local day trip. Where had I not been for a long time? Well, it must be close to 40 years since I was last up in The Forest of Birse in Aberdeenshire, headwaters of The River Feugh. Looking at the OS amp of the area there were many hill tracks, lots of possibilities. I don’t normally research walks online; just as I still prefer to use a map and compass rather than GPS, by and large I continue to tackle things hill related by tried and trusted manual means.

This time however I typed “forest of birse walk” into google and what should pop up but a rather fine report on Walk Highlands by Gordon Ballantyne, an old friend of mine. Gordon and I go back a long way; friend, workmate, boss, hill mentor – I could go on, but as a source of hill inspiration Gordon would be hard to beat and way back in the 1970s he played a huge part inspiring me in my early hill walking career!

Gordon’s suggested walk was a circuit from the Birse car park, over the coll of the hill Brakenstake, down into Glencat then up once again through the pine forest on Lamawhillis (possibly Leamhchoill, “elm-wood”). Continue up to the summit of Carn Ferg then down onto the Fungle Mounth Path and back to Birse passing the rough and impressive looking gulleys of the strangely named Gwaves.

Starting from the Birse car park (Birse is a corruption of the Gaelic ‘preas’ meaning copse or thicket) the ascent to the the coll on Brakenstake is fairly brutal, but on a track all the way. From there we dropped down sharply into Glencat, losing all the height we had gained and meeting two estate employees / keepers on the way. It’s always worth engaging with these people and fine gents they turned out to be assuring us there would be no conflict with shooting parties and even suggesting the best route to take.

Passing Glencat farm we were soon climbing once again, rapidly gaining the height and the pine woods. There were a few impressive wood ant nests crawling with huge ants. Not a good place to sit and have a sandwich!

We reached the summit of Carn Ferg in short order where we had lunch within the walls of a large hilltop shelter. There is a massive monument on this summit complete with an inscribed stone plaque. Dating from 1911 it is now illegible, but my research proved it to be in honour of a certain Joseph Robert Heaven erected by his grieving wife. Who these people were I cannot say, but this is quite an impressive memorial.

Decoding the place names of Aberdeenshire and highland Angus can be a bit of a lottery, most are a mix of English and Gaelic many of them lost in time. Carn Ferg is a good example. It could be many things. Take a look at this extract from Aberdeen University’s “Place Names Of West Aberdeenshire” and take your pick. I find this stuff fascinating!

Down now onto The Fungle Mounth Path. The Fungle is an ancient hill route from Tarfside in Glen Esk over to Birse and then on to Aboyne in Deeside. There are many such ancient rights of way in Scotland dating from days when we Scots were made of sterner stuff and the only snowflakes we encountered came in on the backs of harsh winter storms.

Following The Fungle we passed an impressive lodge, the pony tethering rings on the gable really dating this well kept building.

We turned off the path a little too soon and found ourselves bashing through some rough ground of heather and bracken. Best to keep following The Fungle I think!

So that was it, soon we were back at the car and heading for the cappuccino and Victoria sponge shop in Edzell!

A fine walk that we both thoroughly enjoyed and highly recommended. Only problem is where to next?

And lastly – thanks Gordon! 🙂