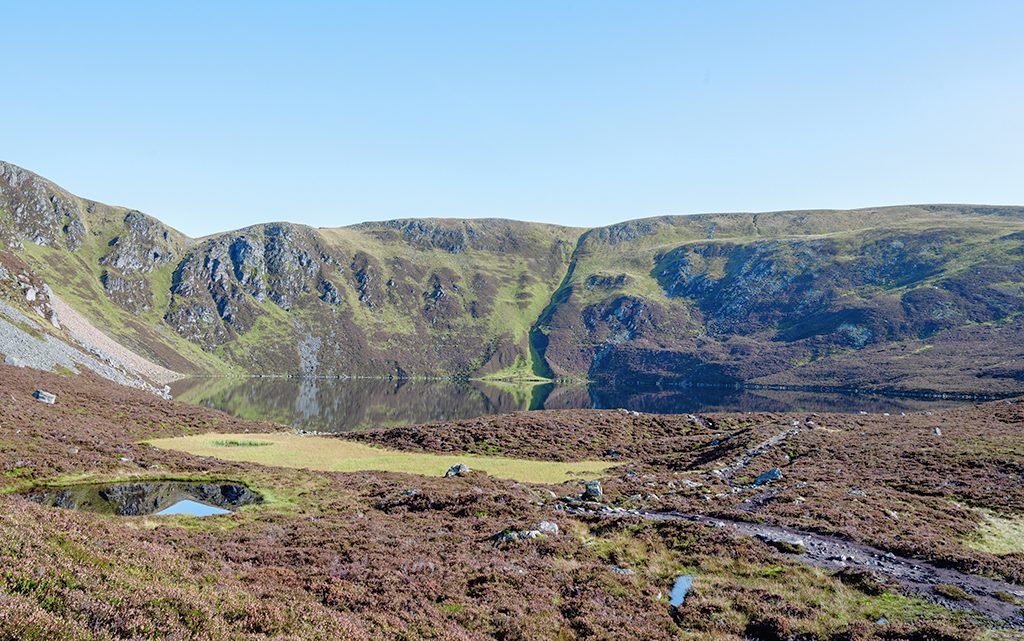 Set The Controls For The Heart Of The Sun

I could not get this tune out of my head. An old classic from the 1960s by what is the only Floyd of significance to most people I know just seemed appropriate on this day of clear blue skies, gentle breezes and smiting sunshine.

The plan was to park in Glen Clova, at the hotel, climb to Loch Brandy, then up the hill onto The Snub, circle the corrie, head up The Green Hill , skirt the corrie of Loch Wharral then head down to the public road and back to the car. The day would be rounded off, as usual, by coffee and cake; this time at the very handy Clova Hotel. A total distance of about 10KM with an accumulative accent of around 900M or so. The route is shaded in blue on my map insert.

Now, before I start, surprisingly, the name Loch Brandy has nothing to do with Scotland’s well known unhealthy relationship with alcohol but is rather a corruption of the Gaelic – “Loch Branduidh” meaning the raven-black loch. Nestling as it does in a dark, crag ringed corrie it often looks black and is well named.

It had been a few years since I was on these hills. In fact last time I was up there at all I was fly fishing in Loch Brandy which is full of trout. Small trout. That said, size is certainly not everything (if it were you would not do a lot of trout fishing in Scotland). Setting, provenance of the fish and the overall experience counts as much as the fish do. For me anyway. Loch Brandy fish are small. numerous and many of them are very green as can be seen in this next image.

There are also a few pike in this loch, but the altitude and lack of cover for an ambush predator means they don’t do well and that means the trout do. However the odd basking pike can sometimes be spotted in the shallow, more weedy outlet bay.

Now and then I have caught slightly bigger fish, perhaps around the pound mark in Loch Brandy but I have found them to be few and far between. The next image shows one such fish which would be a reasonable size for most high level Scottish hill lochs.

Anyway, today there was no fishing, just walking, climbing, sweating, wheezing, grunting and being broiled by the sun. In the long hot summer of 1976 I swam in this loch but I’m much more sensible these days. 🙂

The climb from the Clova Hotel is immediate and brutal. No warm up flat bits to loosen up on, it’s right into the climb here. That said the path is good, even with steps in places on the steeper sections, so you quickly gain height and you can take it as quickly or as slowly as you want.

Reaching the loch we recovered and refreshed by a bed of Alpine Ladies Mantle. The area is noted for its alpine flora.

The climb up The Snub is steep and relentless, but once again the path is good. In the next image you can see the path almost all the way down into the glen and how well made some of the steeper sections are.

The views from The Snub (835M) are extensive with Lochnagar in Deeside looking especially fine.

There has been a massive rockfall / landslide in the corrie. I have no idea when this happened but the freshness of the bare rock suggests it was not long ago. I’m very glad I was not fishing the loch on the bank below when it all come down although I’d guess it most likely happened during a spring thaw or perhaps a flash flood during a thunder storm.

About ½ way round the corrie rim there is a memorial to a young Royal Marine from Arbroath who died up here in 2014 having been overcome by atrocious weather. Twenty years old, a real tragedy for any family to lose one so young. The danger of the Scottish hills is often their modest height compared to the great ranges of the world. A glance at the map can suggest an easy walk but the weather up there can be as violent as one might find in the Arctic and can change rapidly and unexpectedly. These hill should always be respected.

Heading on over the gentle slopes of this alpine tableland we lunched on the Green Hill. This is Dotterel and Golden Plover country but these birds have already left for their winter homes. What we did see hoverer was a Merlin chasing a Meadow Pipit, a pair of Hen Harriers and a Red Kite quartering the slopes.

We continued on a fairly distinct track and soon reach the slopes above Loch Wharral.

I first fished Loch Wharral in the 1970s. Back then it was remote, unspoiled and could only be reached by a hard slog up the trackless hillside. Sadly all that has changed. The estate has smashed a new rough road up the hill right to the loch side and built a garish, hideous bothy; an ugly shed that might fit in better on a motorway construction site. In my opinion this has trashed the area. Could this be the same place where I climbed and skied over Ben Tirran back in the 1970s? Where I fished with old Donald who first took me there? It certainly has lost much of its charm. Old Donald must be spinning in his grave. 🙁

We continued down the hill, hit the main road and hiked back to the hotel. Be aware that the zig zag path down from Rough Craig in now a figment of the cartographer’s imagination. Long gone under bog and burn and a nightmare to descend! I believe The Boy Scouts call it character building. Dib dib dib. 🙂

Alas the hoped for coffee and cake at The Clova Hotel was not to be. The covid restrictions there are, in my opinion, totally OTT. I have never been in prison, but this is how I imagine it might be. As soon as we learned the coffee was weak and was to be served in paper cups we politely told them we didn’t want it and left, opting instead for The Drover’s Inn at Memus where they go to the trouble of providing actual crockery and where the sun does shine. It must be hard for those involved in hospitality right now, but frankly, if they can’t even be bothered to provide a proper cup then they won’t be enjoying enjoy our custom.

A minor blip on an otherwise perfect day. Roll on next time!